How I painted the Sunflower Mural

I was recently contacted by a 6th grade teacher in Gilbert, AZ, who wanted to paint a sunflower mural with her students.
I offered to try to explain my process step-by-step.
I am not a professional painter, and I have no idea if this is the best way to do this or not. But it worked for this project.

Here’s a photo explanation of the process to paint this sunflower mural.  This is about 22 feet long and about 6 feet high.

STEP ONE: Get inspiration.

I found this image online of a sunflower field, and I liked the idea of a few big flowers in the front with smaller “blurry” sunflowers in the background.

Next I found this image that I liked for the field of sunflowers in the background.

Then I searched google for images of individual sunflowers, until I found a bunch of images I liked.
I used these as the inspiration for the individual large sunflowers: 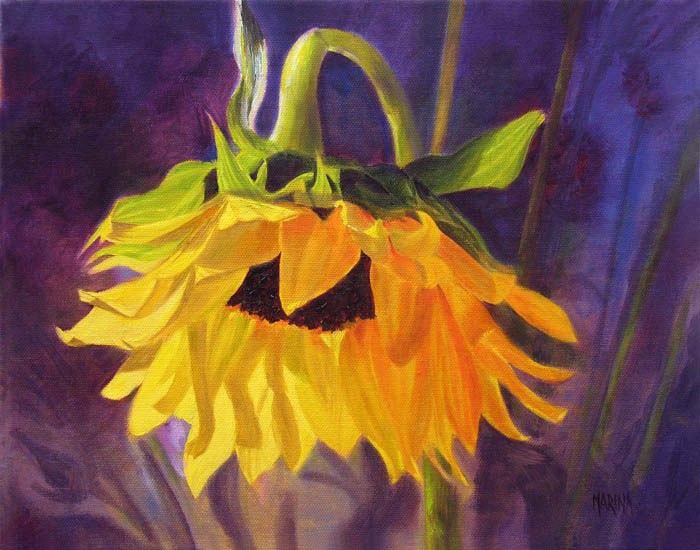 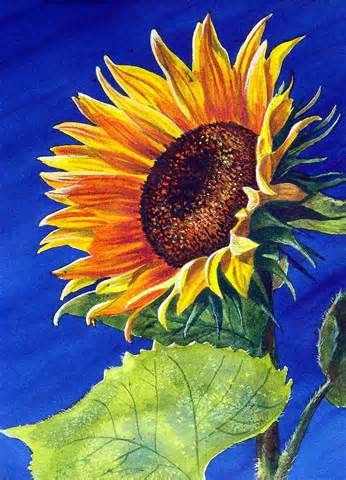 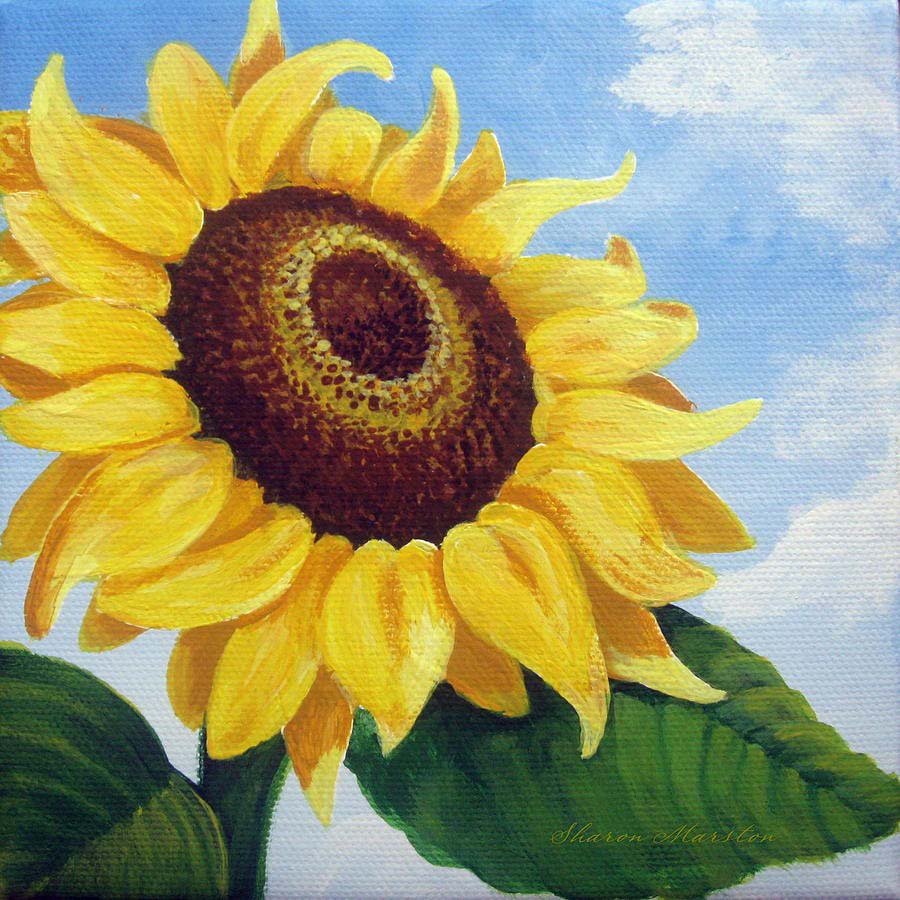 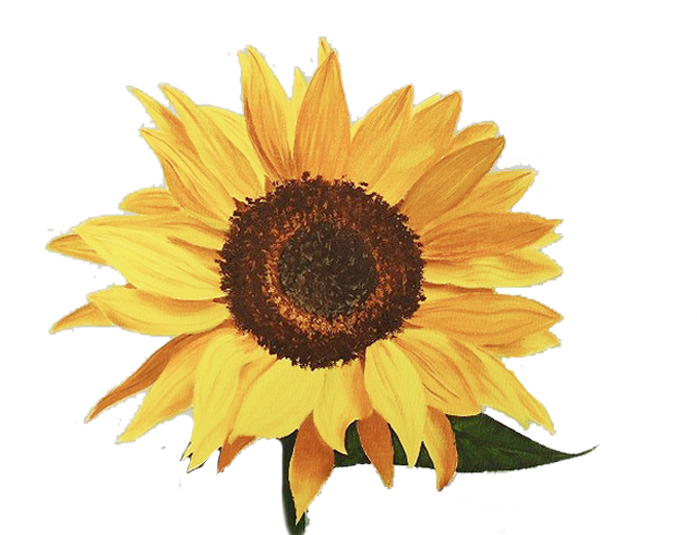 I wanted my mural to have a cardinal, so I chose this image as inspiration: 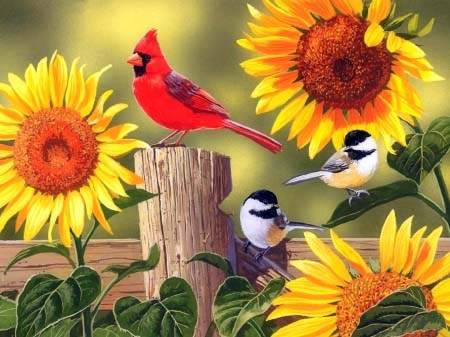 I liked the leaves on this drawing above, and also used this photo below as inspiration for painting the leaves. 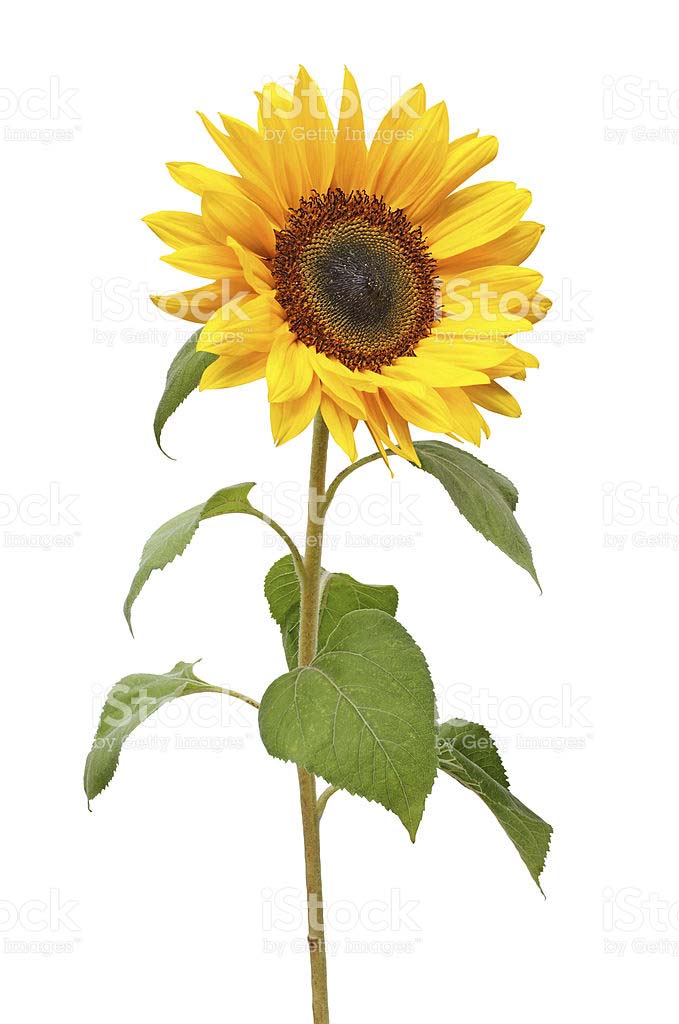 I am a web designer/graphic designer, so I use Photoshop at work.
To plan the mural design, I used Photoshop to create layers of images which I could superimpose over a photo of the blank wall.

First I took a photo of the blank wall, and cropped out the background, to focus on the mural area and remove any obstructions.

Then I took my inspirational images of sunflowers, and cropped or edited them to rotate them, and add stems and leaves, etc.
Then I placed the images of the sunflowers and the cardinal in the approximate locations, and adjusted them for size.
I wanted this to look good from far away, so I made the sunflowers pretty big.

Then I planned the background of the mural. Using spray paint, I would add light blue to the already dark blue wall,  to brighten the sky, and white to make fluffy clouds.
Next, I figured out about how high the background flowers would go: About 2 blocks of the wall, so that the background didn’t interfere with the big flowers.

With all image and background layers turned on, I decided to paint a tan color onto the two vertical block sections at the ends of the mural, add add brown accent lines, to make it look more like an opening in the wall to the sunflower field.

So this was my final design plan.

I printed out several copies of this design and taped them to the wall while I was working.
I also printed out blown up images of the individual flowers, so I could look at the details for the images as I painted.

The bottom background field of flowers was painted by two friends, while I focused on the larger flowers and the cardinal.
The entire project took about a week with the three of us working for several hours each day.
It was painted on a cinder block wall in Tempe, AZ, so the paint dried VERY quickly, and we could keep going without waiting for paint to dry.

I started out by using white paint and a large brush to quickly sketch out the general area where each big flower would go.

The next step was to spray paint the light blue color over most of the background to color the sky. I also used the light blue swirls to define the area for the clouds, then used white, spraying in a circular pattern to make the clouds.

Note about paint: Except for the spray paint used on the background, for all the other paints, I used plain old exterior house paint, or interior/exterior acrylic paint. I didn’t use that many colors in total. I mixed them in old plastic take-out containers and just covered them at night. I got some of the small “sample” cans at Ace for most of the colors. We got quarts for the most used colors like yellow.

I painted brown circles over the white outlines, to define where the center of each large flower would go. Once the centers were defined, I began creating the basic outline of the flower petals using a single color of medium yellow. I used the printouts of the inspirational sunflowers to give me a general shape for each. It’s completely okay if the petals or flower shapes don’t match the plan exactly, because as long as it looks like a flower, it’s perfect.

For the background field of flowers, we started with two dark shades of green, a pine green and a more olive green. and painted the colors on in blotches over the bottom rows of cinder blocks. We stayed to mostly the bottom two rows of blocks for the background greens, and we let some of the blue background show through.

In the next photo, the flowers are starting to get more details. For the larger flowers, once the basic shapes were put into place, I added stems by drawing dark green straight lines down from the center of the brown circles, then added dark green outlines and filled in for the shape of the leaves and the green on the back of the flower heads. Then I added a pale orange color to the yellow flowers to create more depth, using the printouts of inspirational flowers as a guide. Below, Maria adds brown centers to the background field of flowers, with the help of Poppy who has her back. 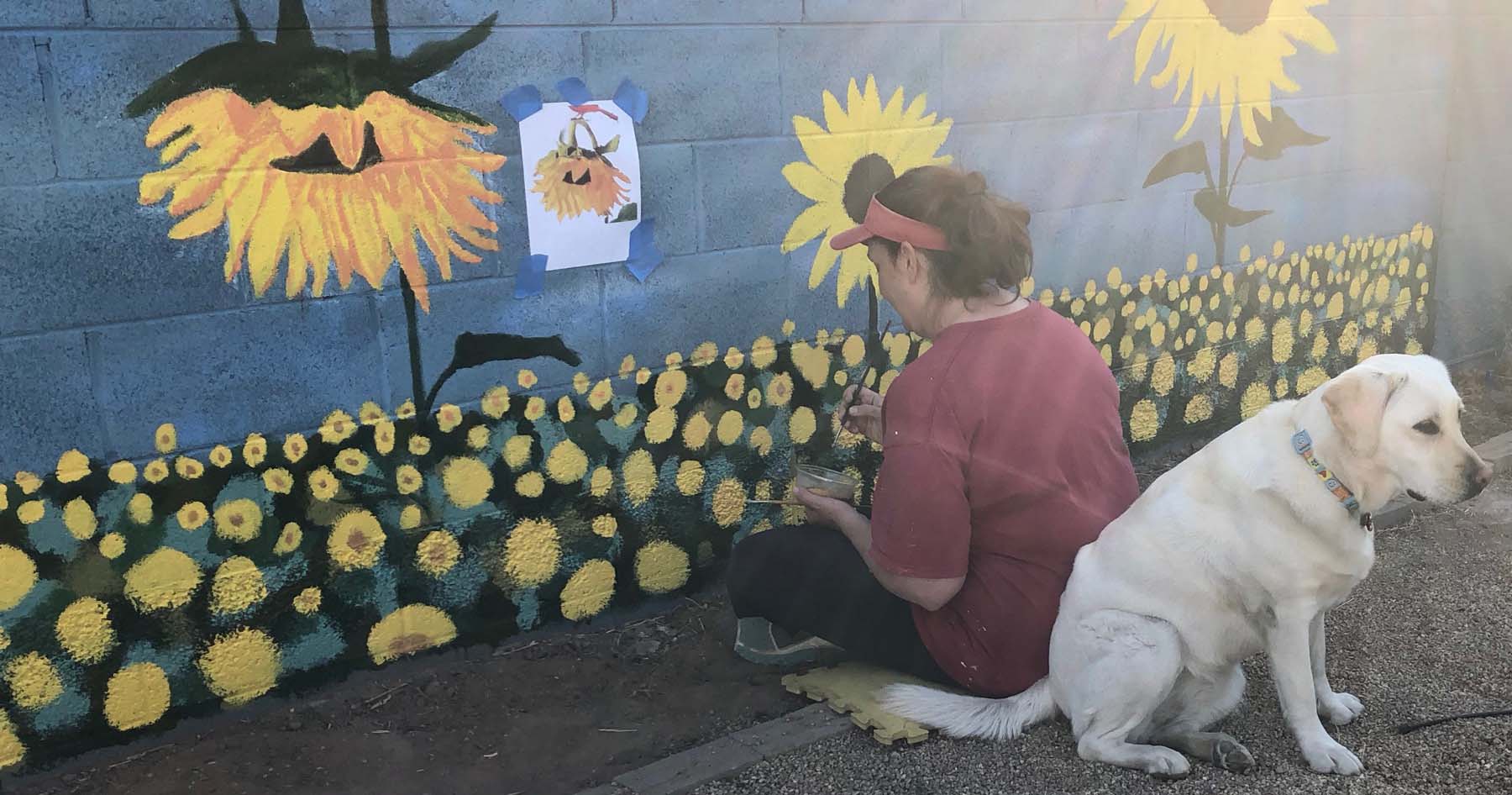 In the next photo, the large flowers all have the pale orange color added.  The background field of yellow flowers are mostly in place now, and most of the light brown centers have already been aded too. The cardinal has an orange beak.

In the following photo, more details were added. The next steps were to put red paint on the sunflowers to show off the darker highlights. I used white and brown to put in details on the unopened sunflower (third from left). The background field of sunflowers is now complete, with darker brown centers added to create more depth 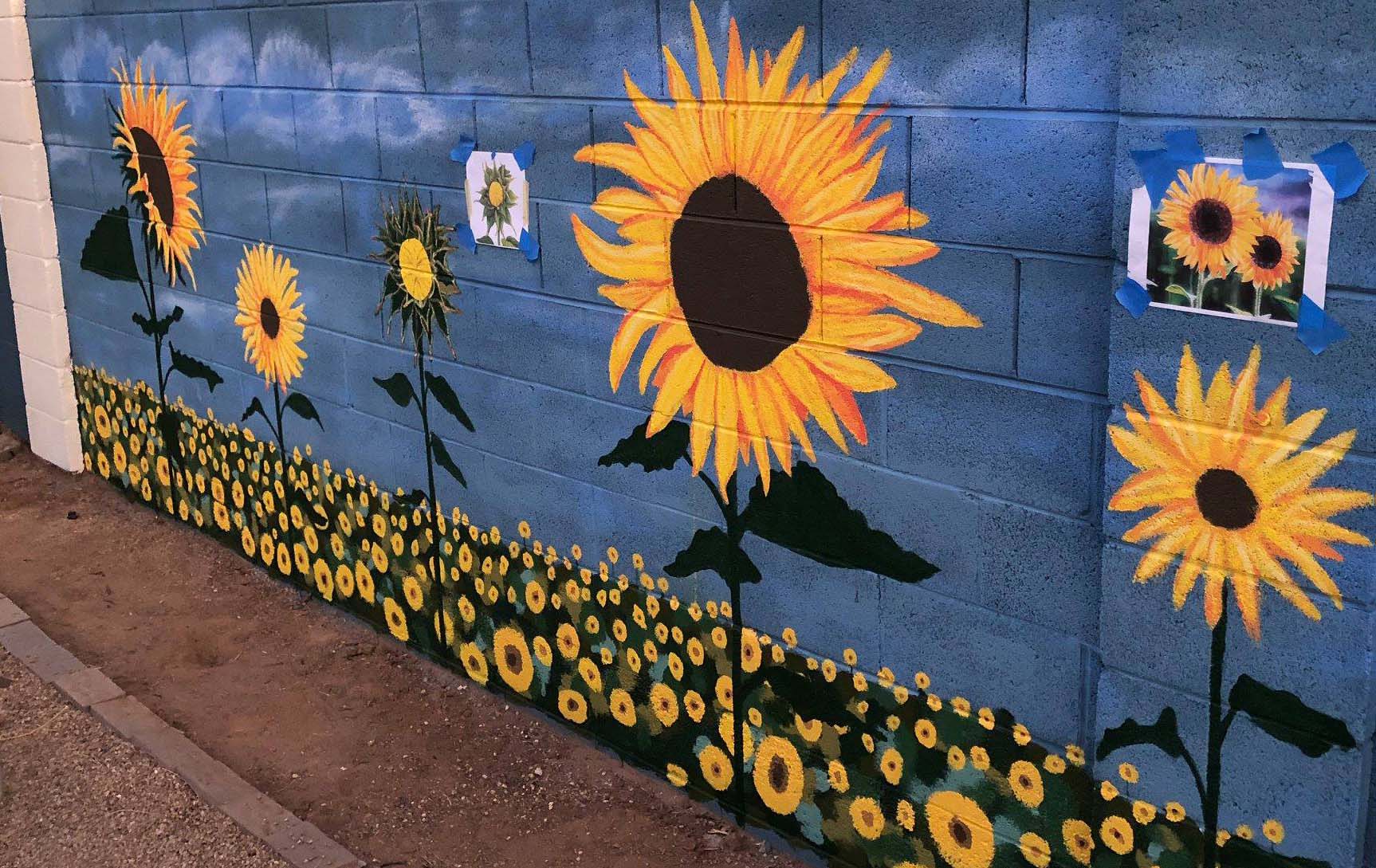 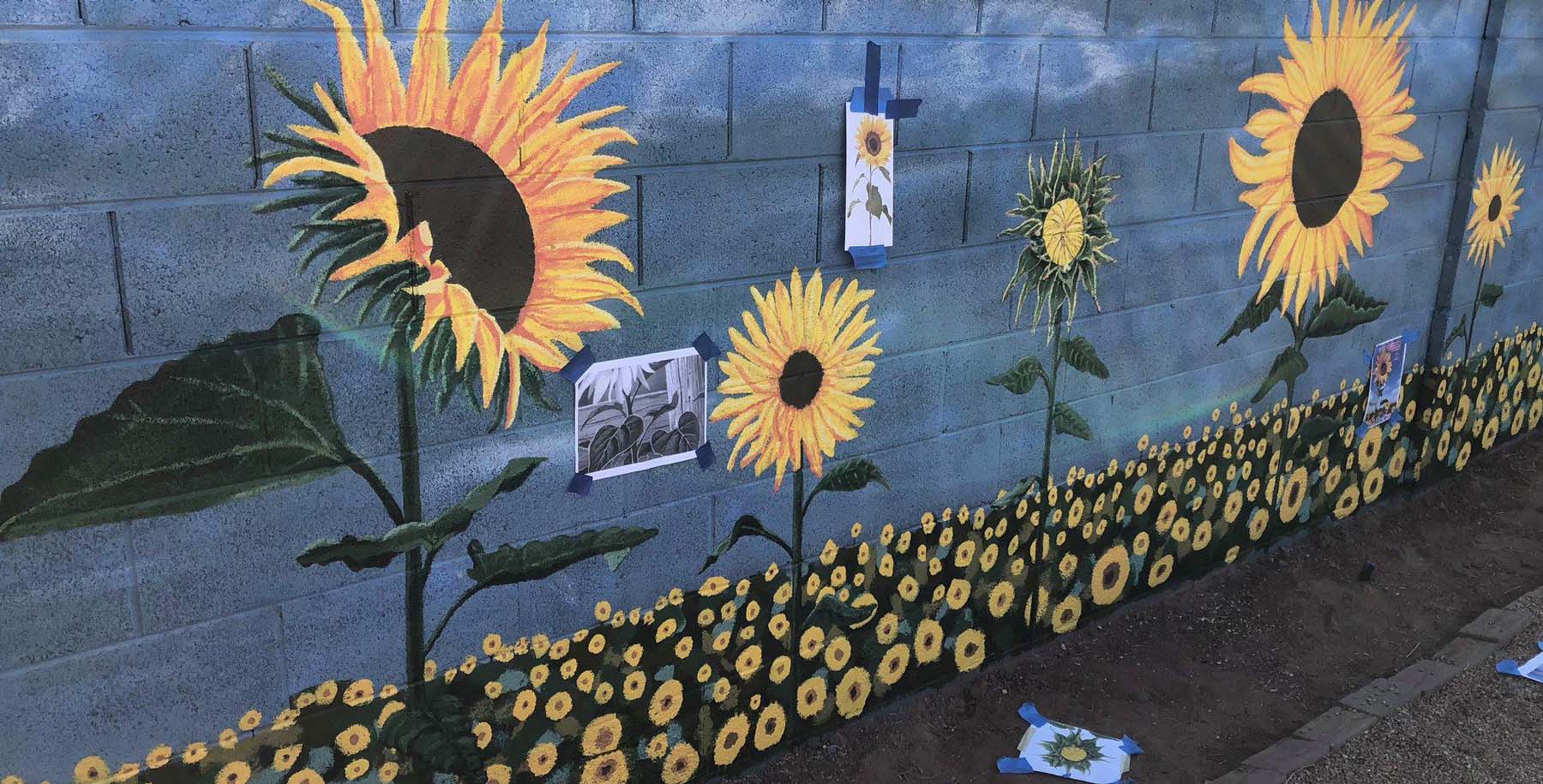 That’s it! I hope this tutorial is helpful and it inspires someone to paint something fun on their walls!

We painted the blocks on each end of the mural in a creamy white shade, and added brown lines to create the “opening” in the wall looking out at the field of sunflowers.

The mural was completed in February of 2018 and still looks good almost 2 years later.

Here’s some photos of the individual flowers, so you can see the details. 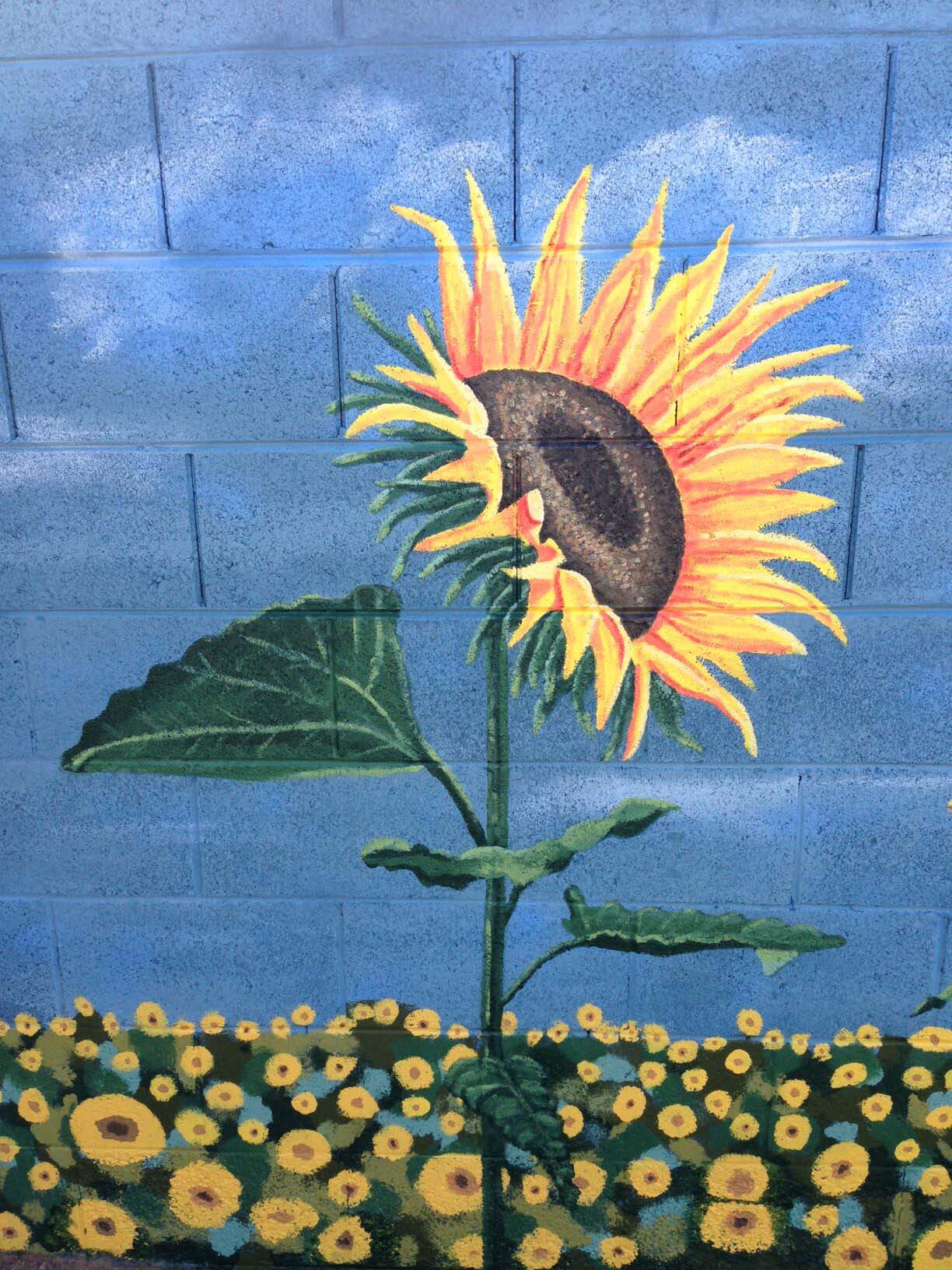 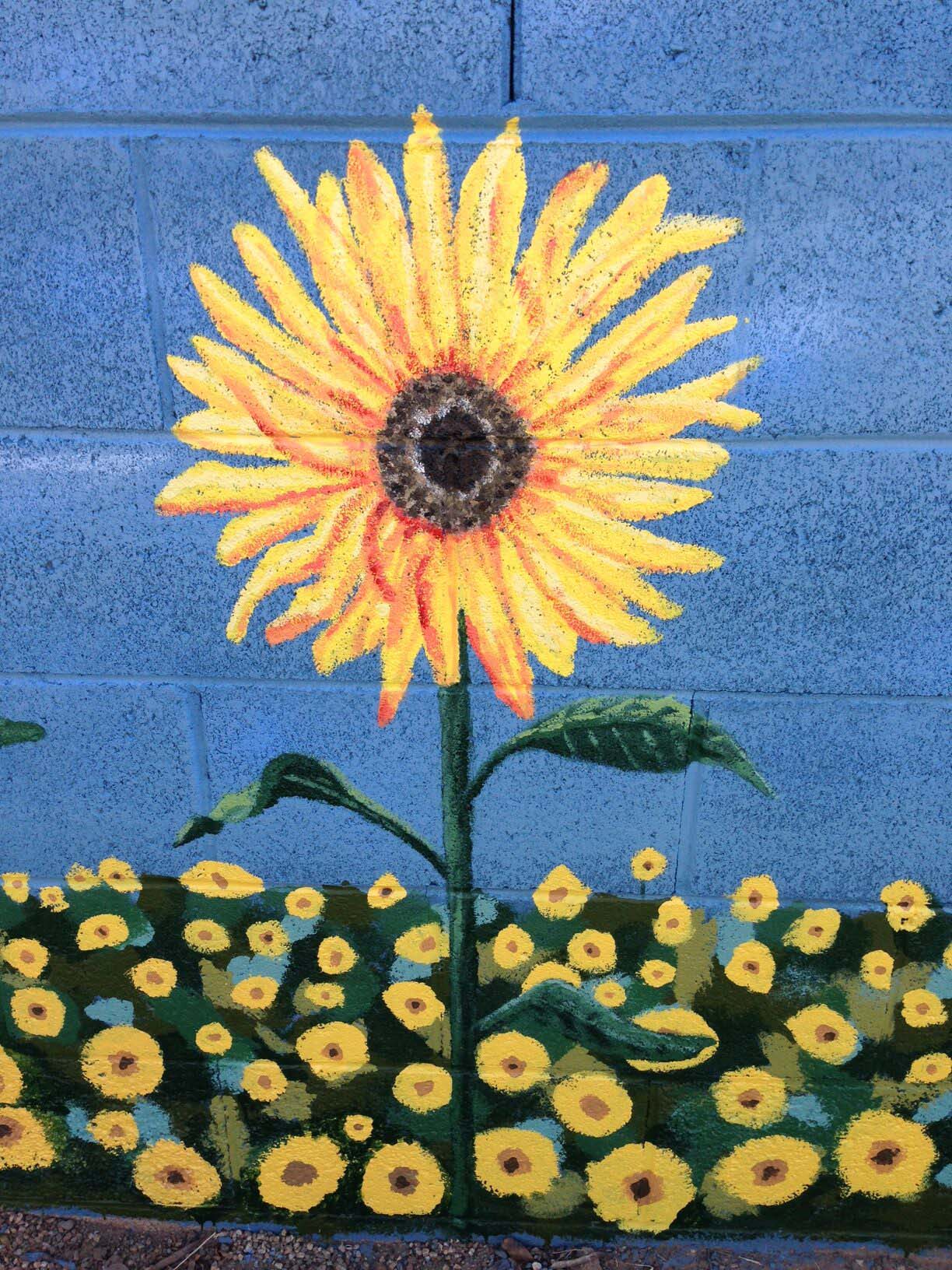 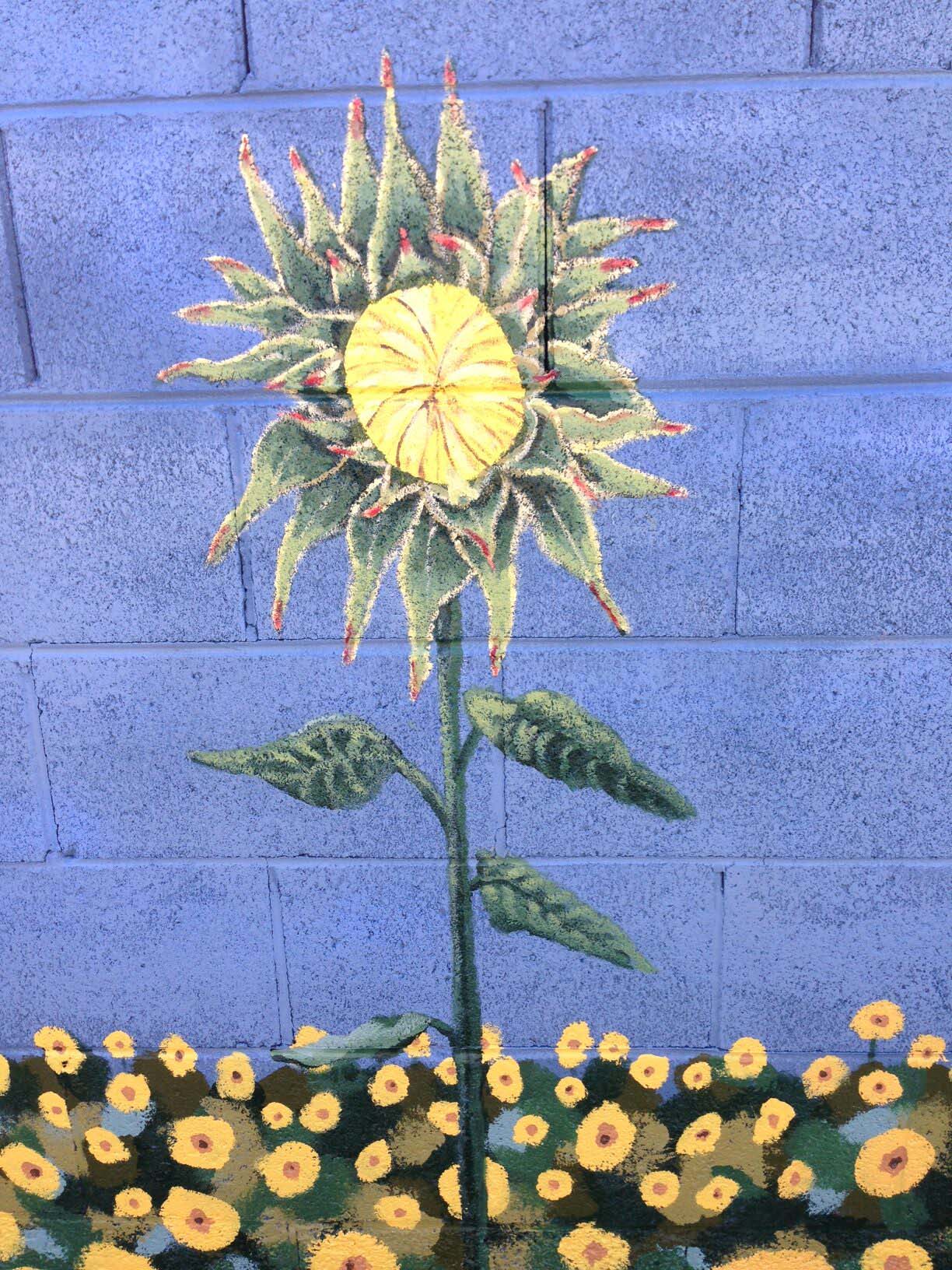 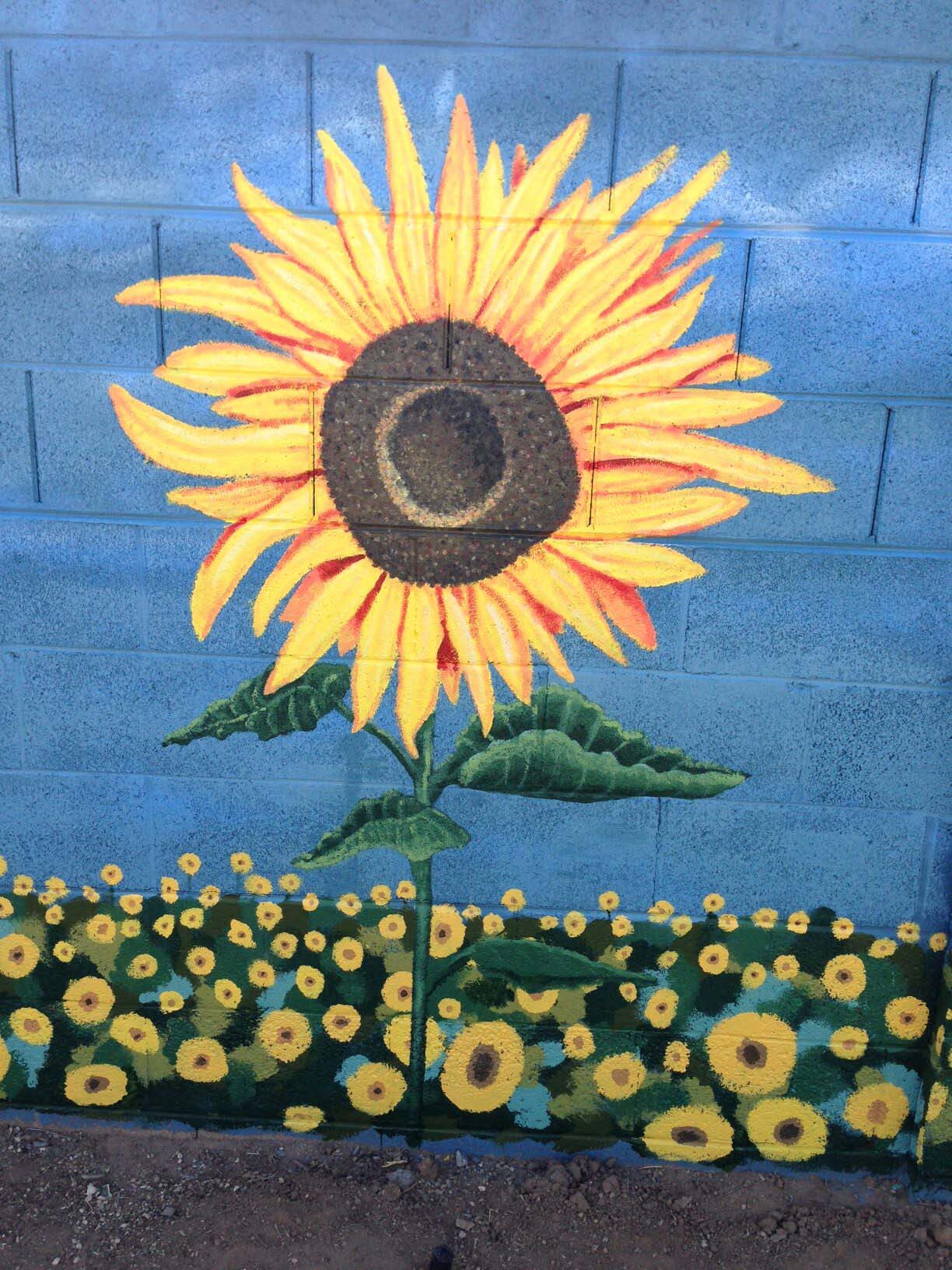 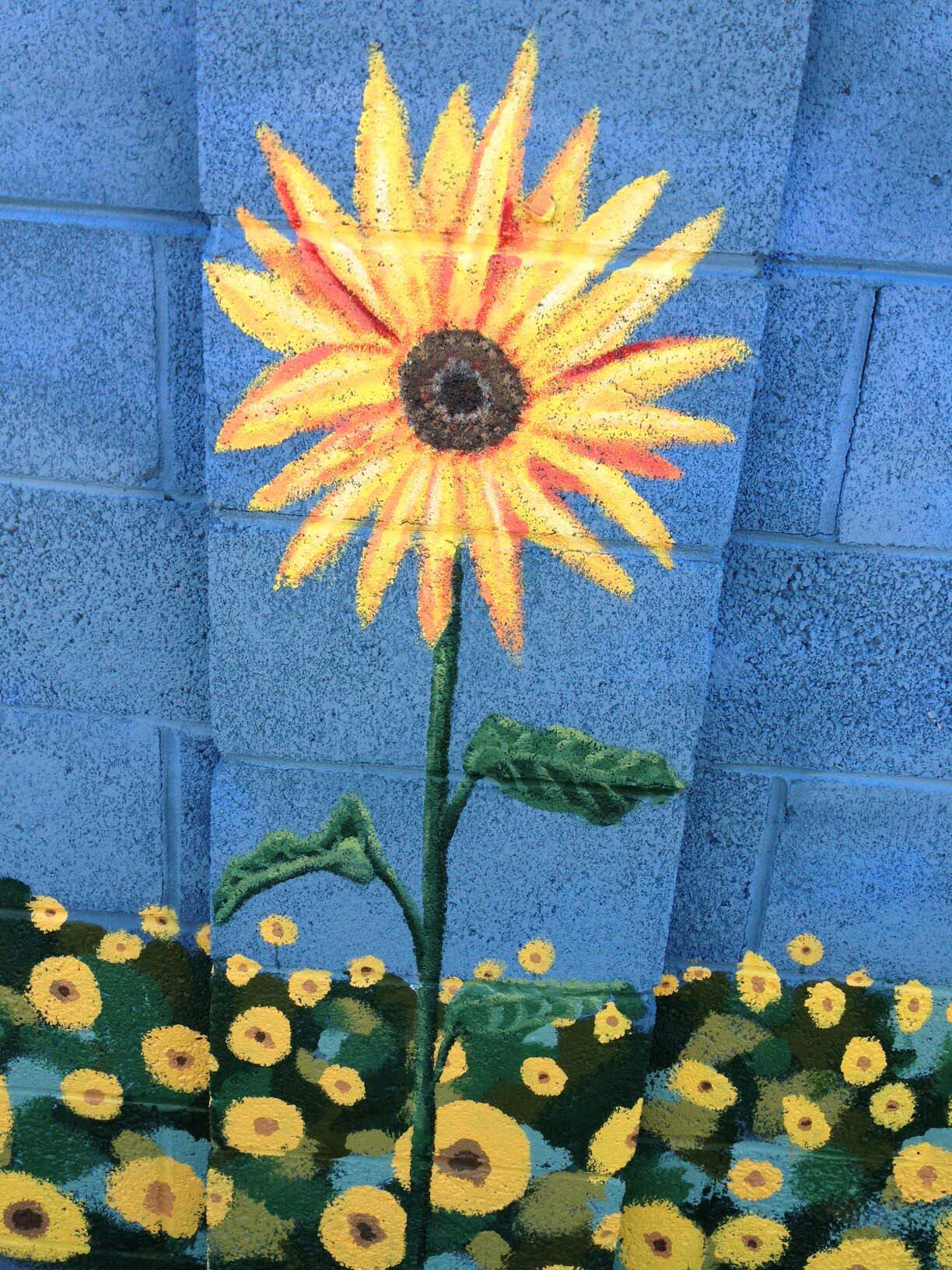 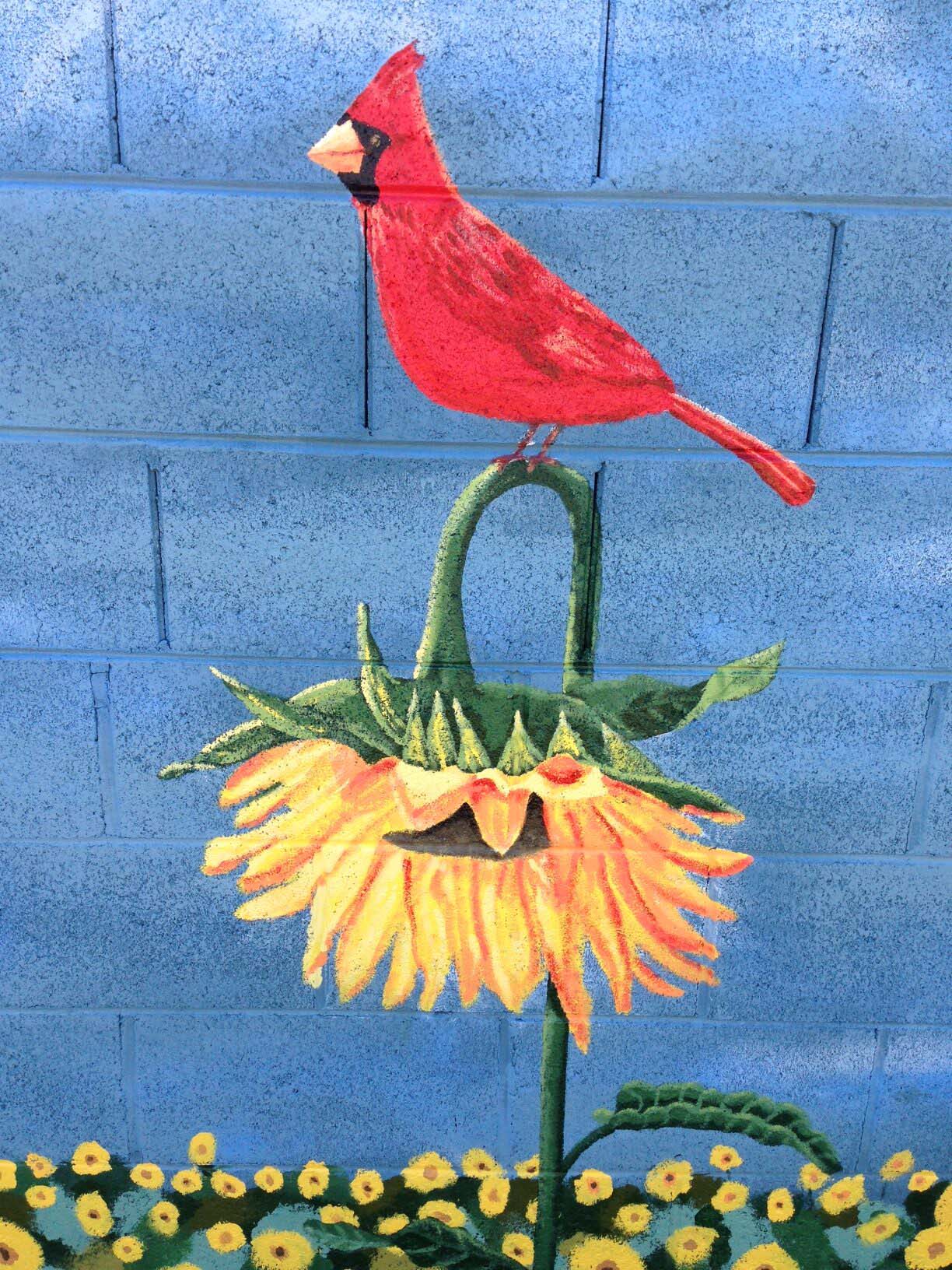 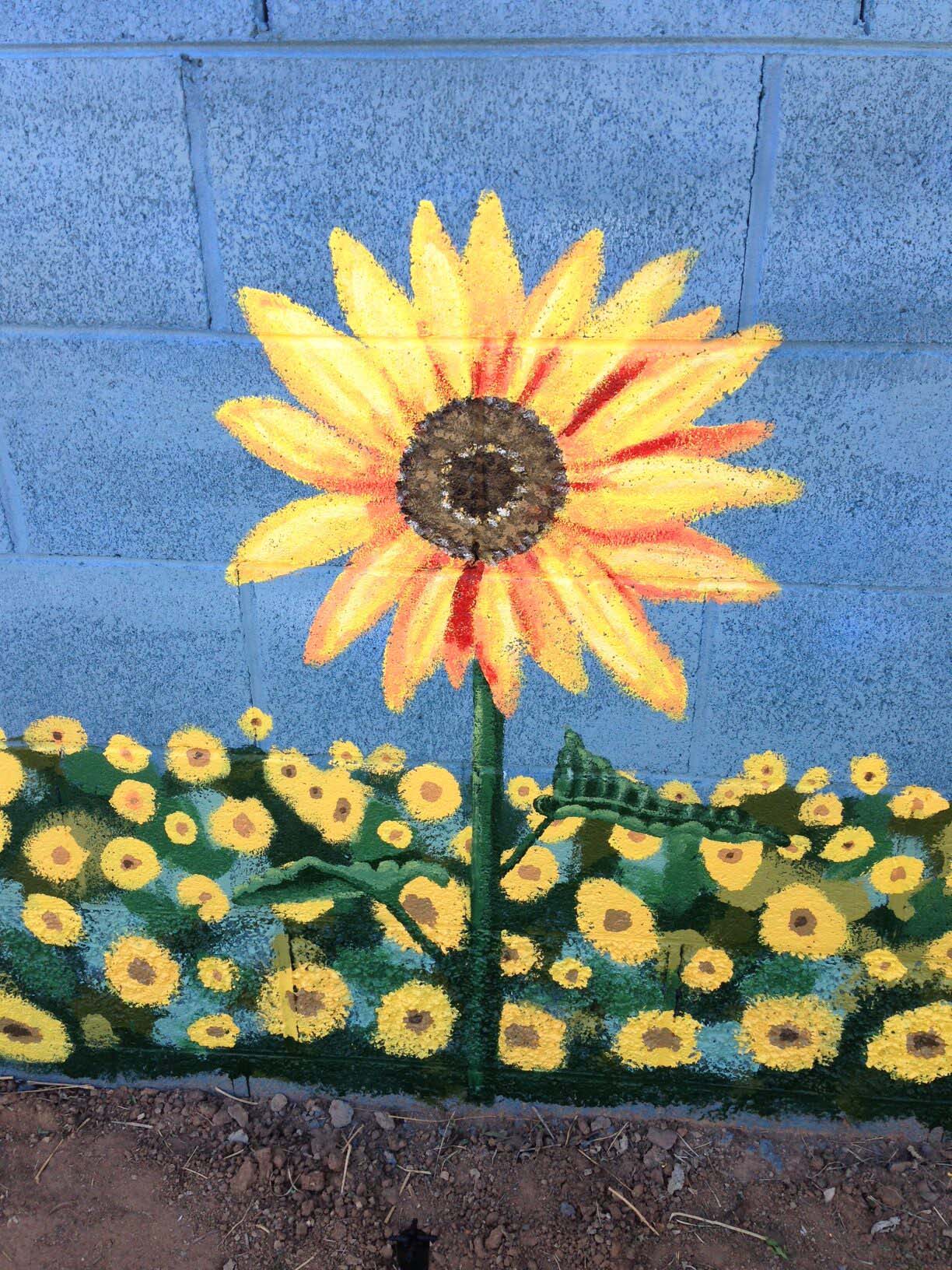 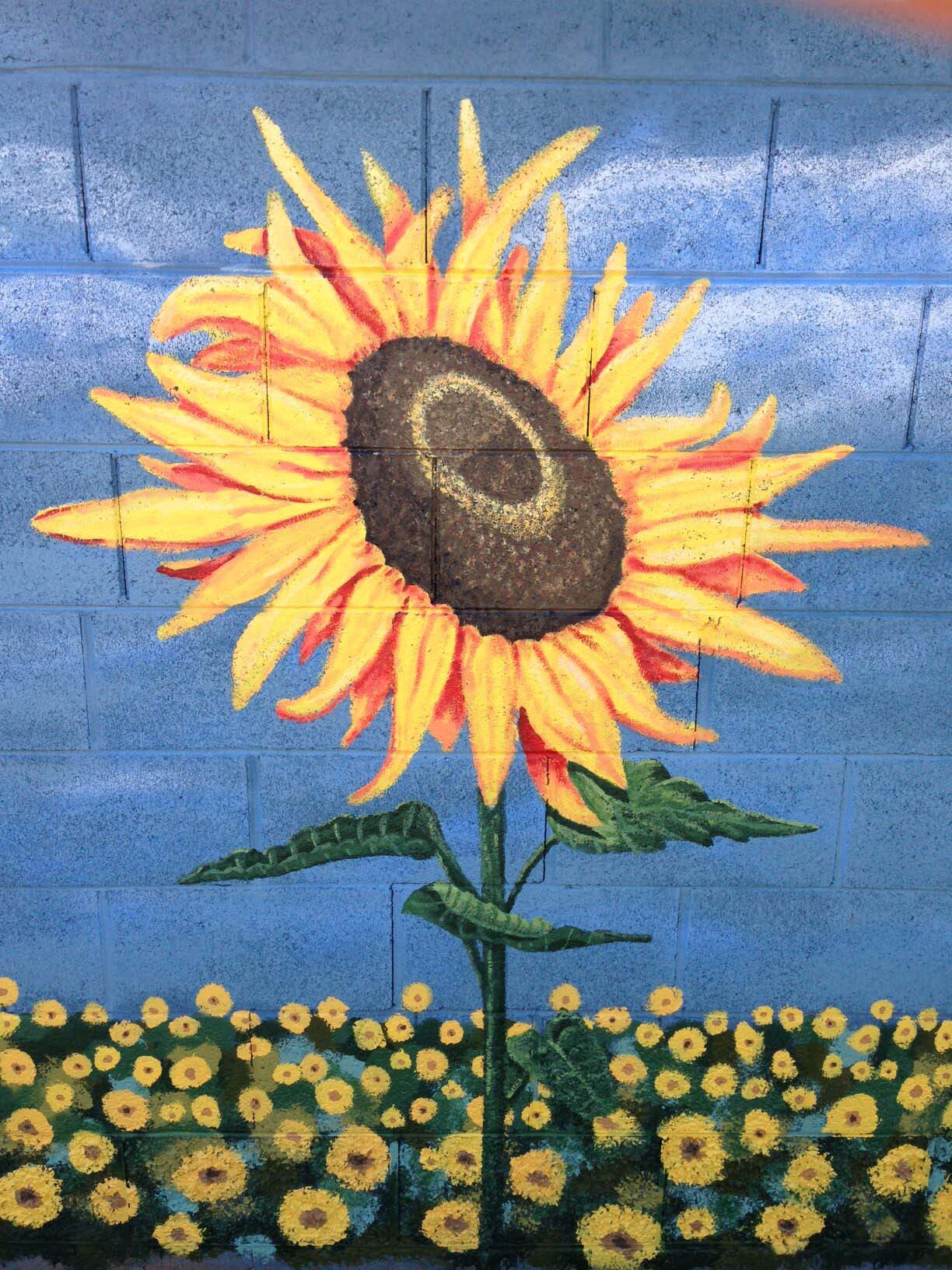 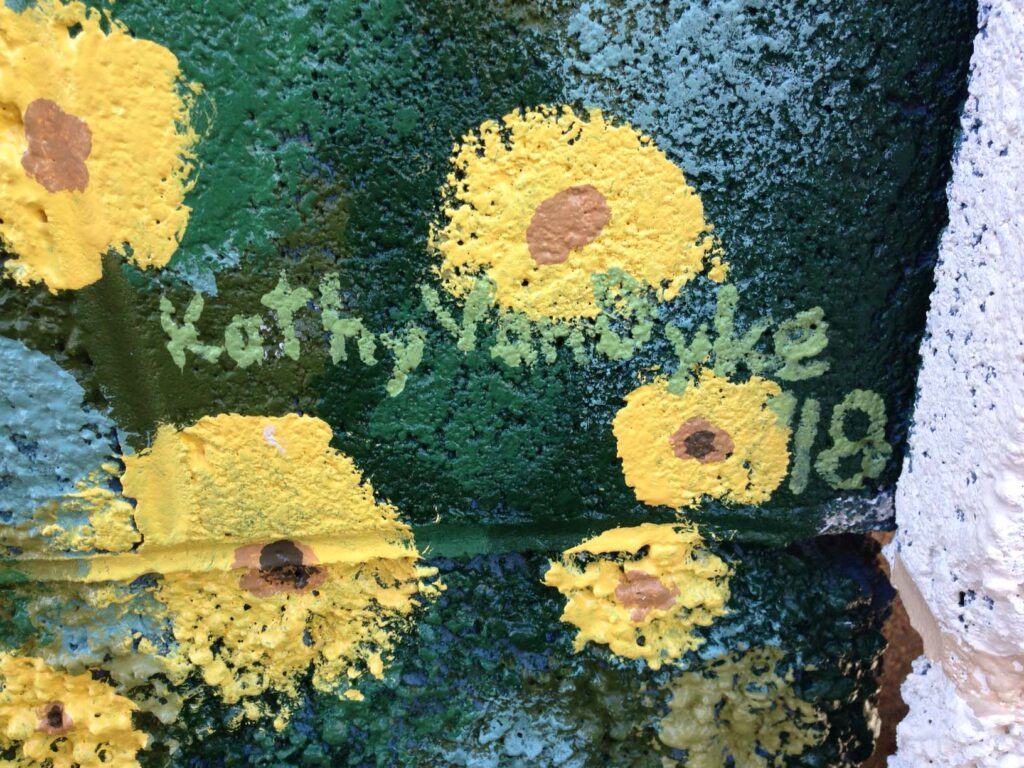 Posted in Our Garden.